To share your memory on the wall of Bernadette Ennis, sign in using one of the following options:

Receive notifications about information and event scheduling for Bernadette

Donations are being accepted for: HEART AND STROKE FOUNDATION OF ONTARIO.

We encourage you to share your most beloved memories of Bernadette here, so that the family and other loved ones can always see it. You can upload cherished photographs, or share your favorite stories, and can even comment on those shared by others.

Paul Tilley sent flowers to the family of Bernadette Ennis.
Show you care by sending flowers

Posted Sep 04, 2020 at 03:50am
Dear Robert, Cathy, Douglas & Family
Please accept my deep & most heartfelt sympathy for the sad loss of your beloved Bernie. She was such a warm & caring person. I remember when you were newlyweds & living on Forest Rd. In St. John’s, you invited us for supper, Bernie was such a marvellous hostess, we felt very special, I never forgot her kind & caring way. May God Bless you all & keep you in his care, you are in our thoughts & prayers. R.I.P. Bernie. With love from your cousin.
Jeannie Buckle & Family ❤️
Comment Share
Share via:
ZM

Posted Aug 29, 2020 at 06:50pm
Deepest sympathies to the family. May your many memories give you comfort. Your in my thoughts and prays.
Comment Share
Share via: 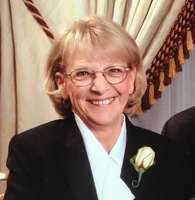