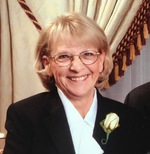 Ennis, Bernadette M. (ne Duggan/Ryan) died at Trafalgar Memorial Hospital in Oakville, Ontario on Aug 24, 2020 after struggling bravely through an extended period of ill health. Born in St. John’s, NL on July 27, 1940 and educated at the Presentation Convent, she was trained as a beautician and co-owned the Wonder Wave Beauty Salon in St. Johns. In 1963 she married Robert (Bob) Ennis and they had two children, Robert Douglas and Catherine Ann. In 1973 they moved to Montreal where they resided in the suburb of Dollard des Ormeaux for 20 years before moving to Ontario. They retired in Oakville, Ont. Left to mourn are Robert, her husband of 57 years; son Douglas in Grease, New York (Denise); Daughter Catherine (James Dolan) in Milton, Ontario; grand children on whom she proudly doted Robert, Trystin and Taryn; and two step grand children, Liam and Abby Dolan; Sister Margaret Colbourn and brother William Ryan in Edmonton, Alberta; brother in law Bob Casey (Yvonne) in Edmonton, Alberta. She was fortunate to have a large number of friends and relations. Cremation has already occurred. Funeral Mass at Saint Dominic Parish Church, 2415 Rebecca Street, Oakville, Ont. At 10:30 a.m. on Wednesday Sept 2, 2020 followed by internment at Oakville Trafalgar Cemetery. In lieu of flowers, donations can be made to the Heart & Stroke Foundation, which would be greatly appreciated by the family.