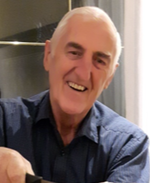 Mr. Bernard John Hawco passed away peacefully at home on Sunday, August 23, 2020 in Milton, ON. Bernie was born on Belle Island, Newfoundland. Son of Walter Hawco and Kathleen “Kavanagh” Hawco. Bernie will never be forgotten by his younger siblings Walter, Gerry, Jack, Kevin, Mario, Marguerite, Carol Ann and is predeceased by his sister Lucy. Bernie leaves behind his beloved wife of 24 years Jacquie Martin-Hawco of Milton who will miss him deeply.
Bernie passed away after a short battle with lung cancer. His life will forever be cherished by his Children Harry, Bernie Jr., Terry (Mary Ann), Tammy, Paul, Tracy (Stuart) and his grandchildren Chantel, Stephanie, Stephen, Julia, Candice, Sierra, Nicki, Krystal, Katie, Brock, Kayla, Bryden and Noah.
Bernie worked at Coca Cola Ltd for over 30 years and became an Ordained Minister at the age of 61. Bernie was much loved and respected by his church family at Milton Bible Church (Connect Centre) where he was known as a father of the faith too so many. Bernie served on the mission field in India over the span of 10 years, moved to Prince Albert, Saskatchewan with his wife Jacquie to work with the Indigenous peoples for over 4 years. Bernie was a pastoral volunteer at Birkdale retirement residence and Allendale Long Term Care in Milton for many years.
Bernie was a typical “Newfie” and always had a funny one liner to make other people around him laugh; his sense of humor was infectious.
He will be missed by everyone who knew him, as he always left a special place in people’s hearts for his love, kindness and compassion.
A celebration of life will be planned for a later date. Donations in Bernie’s memory can be made to “Food for Life” Milton, a passion Bernie volunteered for many years.