To share your memory on the wall of Bertha O'Brecht, sign in using one of the following options:

Provide comfort for the family of Bertha O'Brecht with a meaningful gesture of sympathy.

Print
On January 10, 2019 at Post Inn Village, Oakville, Bertha O’Brecht quietly slipped into a
peaceful and final sleep at the age of 100.

Berte is predeceased by her parents - Ellen Enright and Patrick Hynes; two hus-bands - Victor ... Read More
On January 10, 2019 at Post Inn Village, Oakville, Bertha O’Brecht quietly slipped into a
peaceful and final sleep at the age of 100.

Berte was involved in her church and her community in Toronto and in Naples, Florida. She also like to keep active, long before it was trendy to be fit, and enjoyed alley bowling, lawn bowling, curling and swimming.
In August 2018, Berte celebrated her 100th birthday. For weeks before her birthday, she was feted by many visitors and several parties. She hit the trifecta, when she received birthday
greetings from Pope Francis, Queen Elizabeth II and Prime Minister Justin Trudeau.

A very special thank you goes out to all the staff at Post Inn Village who cared for Berte over the past four years, as well as the Palliative Team who took care of Berte in her final days.

Berte will always live on in our hearts. Family and friends are invited to visit at the McKERSIE-KOCHER FUNERAL HOME 114 Main St. E. Milton 905-878-4452 from 12pm to 1pm followed by a Celebration of Life at 1pm in the Funeral Home Chapel. As expressions of sympathy, memorial donations in memory of Berte to the Canadian Cancer Society would be appreciated by the family.
Read Less

Receive notifications about information and event scheduling for Bertha

We encourage you to share your most beloved memories of Bertha here, so that the family and other loved ones can always see it. You can upload cherished photographs, or share your favorite stories, and can even comment on those shared by others.

Posted Jan 19, 2019 at 05:58pm
Dalyce, My condolences to you and your family with the loss of your mother. I am sure she will live on in the hearts of those who knew her.
Fran Fryters
Comment Share
Share via:
KC

Posted Jan 13, 2019 at 08:52am
Aunt Berte was truly a wonderful woman, cheerful, elegant and devoted to her Faith. She made US happy each time we visited 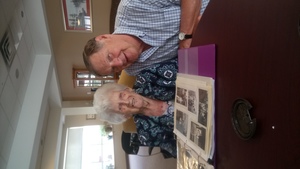 Our last visit with Aunt Berte in August. Lesley, Roger & Anong.
2
4
Add Photos
Upload up to 10 images at a time, max 8MB each