To share your memory on the wall of Earl Snow, sign in using one of the following options:

Receive notifications about information and event scheduling for Earl

You will receive any future notification messages.
Print
To be determined...

Donations are being accepted for: THE SALVATION ARMY MILTON KHI - A COMMUNITY CHURCH.

We encourage you to share your most beloved memories of Earl here, so that the family and other loved ones can always see it. You can upload cherished photographs, or share your favorite stories, and can even comment on those shared by others.

Posted Mar 25, 2020 at 02:31pm
Dear Jo-Anne and family, our sincere condolences to you all. Back in 1958, when I first came to Canada, Earl took me in and showed me Canada from the inside. I was so happy that he had those tractors of his, not horses, and we went to the Omagh Presbyterian Church, a new experience for me, he got me started in Canada and I will be forever grateful to him and his mother Florence. A good man indeed. John and Ivy Sayers - Ottawa
Comment Share
Share via:
D

Posted Mar 25, 2020 at 10:58am
Joanne, Gary and Erla and family, I am so sorry to hear of Earl's passing. I will always remember his kindnesses and welcoming smile, you all are in my heart and prayers, Donna Lea Devlin Grant...
Comment Share
Share via:
JC

Posted Mar 24, 2020 at 07:42pm
Dear Jo-Anne and family, Our deepest condolences on Earl's passing. We always enjoyed seeing and talking with him at the Steam Show over the years. Please know that you and the family are in our thoughts and prayers.
Jo-Anne (Downs) & Brad Clements.
Comment Share
Share via:
HW

Posted Mar 23, 2020 at 01:04pm
Will miss seeing him drive up and down Bell School Line checking the fields.
Condolences to the family
Comment Share
Share via:
A 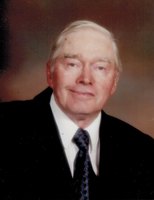