To share your memory on the wall of Luigi (Gino) Da Re, sign in using one of the following options:

A private family service and burial is being held.

As an expression of sympathy, memorial donations to the St. Vincent de Paul Society would be appreciated.
Read Less

Receive notifications about information and event scheduling for Luigi (Gino)

We encourage you to share your most beloved memories of Luigi (Gino) here, so that the family and other loved ones can always see it. You can upload cherished photographs, or share your favorite stories, and can even comment on those shared by others.

Posted May 29, 2020 at 10:42am
Peter, Marianna, Joseph So sorry to hear of your loss our thoughts and prayers are with you all and the rest of the family. Dad and Grandpa has had a very interesting life an I believe this carries on with you also. Frank, Gordon and Gladys Hume

Thank you so much to Gladys and Family, yes interesting indeed, but a lover of life! Ty again

Posted May 29, 2020 at 08:59am
We the Brooks family (former neighbors of your farm on Guelph Line) are very saddened by the passing of Gino. Sean and Chris were always welcomed at your farm by your Mom And Dad. Our sincere condolences.
Comment Share
Share via:
P

Thank you so much Carol and family, your thoughts and wishes are very well received by the DaRe family. Peter Da Re and family
MM

Thank you so much Maria for the sign of your love and support. Blessings, Peter DaRe and Family
RS

Thank you Rodolfo and Family, your thoughts and prayers for our Father and Wanda's Loving husband are greatly appreciated . Peter DaRe and family
CO

Posted May 24, 2020 at 01:02pm
We would like to express our deep heartfelt sympathies to the whole Da Re family. We had the pleasure of meeting "Gino" a few years ago when he was out with his sons and grandsons and would enjoy his company each year thereafter when he was still able to get out and about.
We enjoyed our time spent with him as he was such a kind, fun loving and caring man that was always smiling and happy whenever we would see him and the memories that we have of him will remain in our hearts, he will be missed.
Our thoughts and prayers go out to all of you, his family at such a sad time. With our deepest condolences.
Salem and Chris Orenchuk
Comment Share
Share via:
P

Thank you so much Chris and Salem for having always kept Gino in your thoughts and prayers over the years. I especially thank you both for the wonderful friendship you have extended to all my family . Thank you for the very kind words of support. Peter, Marianna and the entire Da Re family 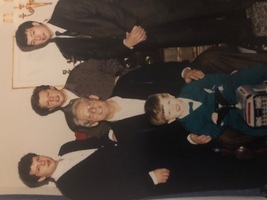