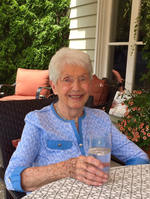 After almost 98 years, Joan passed peacefully on July 9th 2020, in Georgetown, Ontario, Canada. She was the best friend and loving wife of Cortland Jerome Brown for 67 years and is survived by her three children Carol (Savian), Scott (Rosalind) and Lesley-Anne, eight grandchildren, four great grand-children, nieces and nephews, and by so many of her dear friends.

Joan will be remembered for her welcoming spirit, gentleness, touch of class, and bravery. Born in Capreol, ON to a Canadian National Railway executive, she moved nine times in eleven years allowing her to make many dear friends across the country with whom she remained close throughout her entire life. Joan was an avid global explorer venturing to Europe by sea in her 20’s and many other countries later in life. Her adoring father gave her away to Cort in 1952 and they eventually settled in Montreal West. Joan became a strong part of her community, participating in the PTO, volunteering at the Queen Elizabeth Hospital, and with Girl Guides. She was an active golfer, badminton player, and enjoyed playing bridge. Joan and Cort built a cottage in the Laurentians (Lac Manitou), which became a legacy for the entire family and their friends. A place of welcome refuge for all, it was full of noise and excitement with regattas, Manitou Olympics and maple syrup production. Each spring you could see her canning the syrup they handed out to their friends and family. She and Cort also spent many years in Florida during the winter months where they often volunteered in their local community, including teaching students English. She touched many she met.

Joan was looking forward to join her gentle father and oldest friends Marg Brooks and Marj Shepherd, all of whom she missed dearly. She left the same day of the year as her brother-in law, Sam Adams for whom she held a special place in her heart.

The family wishes to offer thanks to the wonderful people at the Mountainview Seniors Residence (The Mount) who have opened their arms for Joan and Cort over the last few years.

Joan supported dozens of charities, but had strong connections to the Montreal General Hospital Foundation. Those wishing to make donations can do so through the McKersie-Kocher Funeral Home website

We will ALL miss you so much Nana.