To share your memory on the wall of Michael Gadway, sign in using one of the following options:

Provide comfort for the family of Michael Gadway with a meaningful gesture of sympathy.

Family and friends are invited to gather on Thursday, January 30, 2020 from 2-4 pm and 7-9 pm at McKersie-Kocher Funeral Home 114 Main St. E. Milton 905-878-4452. Holy Mass will be celebrated to honour his loving life on Friday, January 31, 2020 at 11am at Holy Rosary Church 139 Martin St. Milton. As an expression of sympathy, memorial donations to ALS or the Townsend-Smith Foundation would be appreciated.
Read Less

Receive notifications about information and event scheduling for Michael

Donations are being accepted for: Townsend Smith Foundation.

We encourage you to share your most beloved memories of Michael here, so that the family and other loved ones can always see it. You can upload cherished photographs, or share your favorite stories, and can even comment on those shared by others.

Posted Feb 02, 2020 at 11:51am
We are so very sorry to hear of Mikes passing. He was such a great guy. Sending you all love and hugs. Thinking of you Jeff.
Comment Share
Share via:
B

Posted Feb 01, 2020 at 11:14pm
Sad news indeed. ‘Auntie’ Ruthie , Michael. and Carolyn were all important to me as extended family and neighbors at Mountain Lake. Meeting Mike again later in my life at IBM was special too. He was always kind and fun to spend time with. My condolences to you Trixi (who I met when I was very young), Carolyn and your families. I will hold a warm spot in my heart for Mike.
Comment Share
Share via:
NM

Posted Jan 31, 2020 at 10:56am
I have no words. Mike was my friend and mentor at work so many years ago. He was a quiet leader and incredibly thoughtful, kind, funny and compassionate. The world has suffered a major loss and my thoughts go out to all of those who's hearts are breaking. Rest in Peace in friend.
Comment Share
Share via:
KP

Posted Jan 30, 2020 at 08:15pm
Condolences to Trixy, Carolyn and Jeff. Loving thoughts are with you at this time of loss. Treasure the memories .
Comment Share
Share via:
KP

Posted Jan 30, 2020 at 08:13pm
Condolences to Trixy, Carolyn and Jeff. My thoughts are with you at this time of loss. Cherish all the memories. 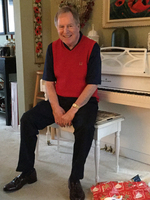