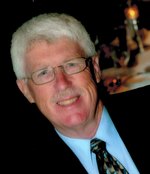 In the early morning of Friday, May 1st, 2020 - Mike slipped away peacefully at Milton District Hospital - after a difficult battle with brain cancer. Michael Anthony Charles Tovey was born December 3rd, 1942 in Redruth, Cornwall, England. Mike immigrated to Canada with his mother and father when he was 10-years-old. He lived and went to school in Oakville and Etobicoke. His working career was spent in sales and computers in the Town of Milton. His last years were spent working at the Toronto Auto Auction. Mike and his wife Kathy spent their married lives raising their two boys (Scott and Jordan) in Milton. Mike’s greatest joy was watching his sons grow-up to the men they are today. Mike will be missed by his wife Kathy, sons Jordan and Scott (Leanne) and grandchildren Aiden and Sydney, as well as many other close family and friends. Cremation has taken place, and at his request there will be no funeral service, but a celebration of life may come at a later date. If you wish to honour Mike’s memory, donations can be made to Halton Down Syndrome Association and Milton District Hospital Foundation.