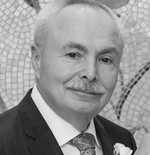 Peter Scarsella left his earthly body suddenly on December 26, 2019. He was 66. He was deeply beloved by his family, and we are devasted by this unexpected loss. He is survived by his two children, Joel and Lauren, and adopted son, son-in-law, Salim; his wife and partner Daniela; sister Louisa; mother Giovanna, nephews Alexander and Peter; grand fur babies Smudge and Tilly, and numerous beloved cousins in New York and Italy, and many more who loved and adored him. Peter was a natural engineer, who was constantly constructing things and solving problems. He knew how to command a room and could parlay himself into the director of any operation. After his children, his proudest accomplishment was his involvement in the 2002 visit of Pope John Paul II to Toronto. An excellent listener, he loved to debate for sport, a consummate negotiator and was a crusader for justice. He took pride in everything he set his mind to and was able to excel in ways he never imagined, despite his struggles with dyslexia. Peter was a connoisseur of Cuban cigars, gangster movies and thin crust pizza on the BBQ. A slam poet in his own right, he was a seasoned air drummer and back-up air guitarist for some of the greats, like Led Zeppelin and Pink Floyd. He has been backstage to every show anyone of us has ever wanted to attend. Peter knew one line – and only one – of every song he ever loved. He loved to dance like no one was watching and to sing like he knew how to carry a tune. Peter had a story for every occasion and could bring laughter to any situation. Born in Italy, at the age of 2 Peter moved to Canada with his parents. He loved to summer in his Italian homeland and could never refuse a fresh plate of pasta. A born adventurer, albeit on his own terms, he said yes to everything when the spirit moved him. Peter deeply cherished and fiercely protected everyone he loved. He believed in the eternal souls of all animals and prayed for the salvation of every piece of roadkill he passed, even those that may have been rags. In his final days, Peter spoke of the spirituality in waiting for spring to see his cherry trees blossom, and the power in the love for one’s own family. We miss his presence and wisdom already. Family and friends are invited to visit at the McKERSIE-KOCHER FUNERAL HOME 114 Main St. E. Milton 905-878-4452 from 7-9pm on Saturday December 28, 2019, 2-4pm and 7-9pm on Sunday December 29, 2019. Mass of Christian burial will be held at Holy Rosary Catholic Church, 139 Martin Street, Milton at 2pm on Monday December 30, 2019. As expressions of sympathy, memorial donations in memory of Peter to the Heart and Stroke Foundation would be appreciated by the family.